The most important thing, above color and size, is placement. No matter what the object is, where it's placed is the key to good design. Whether you follow the rule of thirds, golden ratio, balance, or the visual triangle...you're contemplating placement!

It's interesting to realize that sometimes type is all you need to get a message across. That doesn't mean to say it'll literally spell out the message, but the placement, font, and other features are what tells the story. Think about a blank paper with "Dead." written in tiny black, bold font in the middle of the page. Weird, right? What if we take the last letter and turn it on its side? A little curious, perhaps? A multitude of possibilities.

My objective was to portray randomness and organized chaos. The business I chose to represent is one of my own concepts. It's called "Life Poorly Explained" where millennials discuss the wrongs of the world. This poster was specifically inspired by the upcoming presidential debates. However, my original plan was met with unskilled hands, and I was forced to use the concept in another way.

I was really grateful my charger broke, because it gave me the forced break I needed to think about how I wanted to convey my message. Finally, after another five hour drive through nothing but dry fields...it came to me like a mirage. Perhaps it was the billboard screaming "Where's the Water?" or maybe my mom's nagging to watch the debate when I got home. 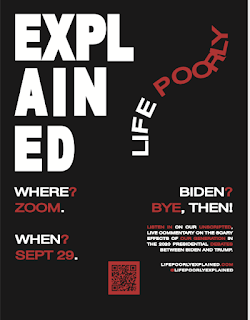 Popular posts from this blog

The Profession of Graphic Design

September 13, 2020
Describe who you are as an artist, designer, student? What you are focusing on in your field of study? What are people going to read on this blog?
I am a writer by trade, but I dream in pictures. After graduating with a B.A. in Creative Writing, I kept feeling that tugging in my brain telling me that there was something else. Growing up, I had always wanted to design things. School buses, bedrooms, logos, websites (I have too many of those)...anything you can think of, and more. Silly thing is, I never took the time to understand the principles of design, to use illustrator...until now!
My prior experience with photoshop, cinematography, photography, and some design knowledge, has allowed me to sustain some sort of portfolio, but it causes me to wince when I forward it to someone, especially job potentials. That is why I am taking graphic design. I hope to improve and expand my portfolio beyond words and home-baked graphics––to prove that I understand design and the marketing behind it. …
Post a Comment
Read more

What is Graphic Design?

September 13, 2020
Graphic Design is what I call the "science of arts". A graphic designer is a manipulator of creativity, turning it into money. Combining CAD skills, fine art, typography...it's no wonder graphic designers are in such high demand! With high demands, come high costs. Graphic designers, depending on area of focus, can earn well over $40k a year, and that's entry level at best! If you're a graphic designer with three or more year's of experience, you should expect (and don't accept less than) over $90k a year.
What's even greater than a great salary (that appreciates, trust me), are the concentrations you can focus on. For example, graphic designers have skills that fit into the roles of say, UX Design, web design, marketing/advertising, and even production design! Gee, with that many options, there's no telling what you could do.
Maybe this is more of an opinion rather than a fact, but it baffled me to be reminded of the many skillsets graphic designers…
Post a Comment
Read more

Elements and Principles of Design

September 13, 2020
The science behind the art of design is accredited to six elements and six principles. The six main elements (or visual traits) of design are; line, color, shape, texture, size/scale, and direction. Whereas the principles of design–the message created by the used element–are as follows: proximity, balance, alignment, repetition, contrast, and space. The principles of design, however, are not limited to these. Your principles may depend on style or practice.
So, why do elements and principles matter? If you're venting anger or calming your chi, it might not. However, if you're looking to create captivating visuals, understanding some of the core traits will help you to convey your message or story successfully. You don't want a crowded mess now, do you? Well, actually, you might...if you know how to do it tastefully!     Once you've got a pretty good grasp on some principles or elements or elephants, it'll be your ticket to success! No matter who you are, a writer…
Post a Comment
Read more